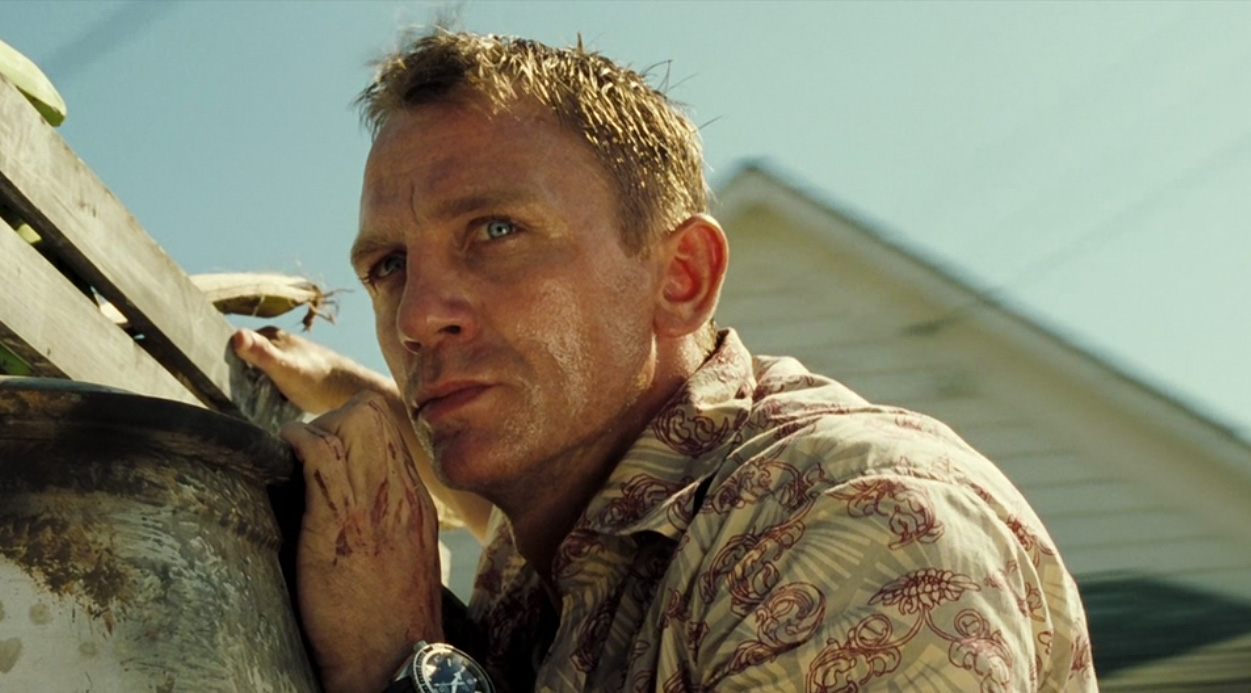 It’s not difficult to imagine a version of Casino Royale that begins with the Madagascar chase, omitting the black-and-white pre-title sequence altogether. Which isn’t to suggest that the opening sequence is extraneous (though many of the “origin story” elements of Casino Royale are a gloss on the story rather than essential narrative components), but that the Madagascar chase also serves as an introduction to this new Bond. It’s not just one of the best action scenes of the series, but one of the best action sequences of all time: a kinetic character study.

The Bond franchise may have helped establish the action film genre, but the Bond films do not contain many exceptional examples of action filmmaking. Yes, the series contains a lot of breathtaking stuntwork, but that’s not the same thing. In the classic films, the actual nuts-and-bolts filmmaking in the action sequences tends to be dependable and efficient, but rarely venerable. To the credit of director Martin Campbell, his second unit director, Alexander Witt, and editor Stuart Baird, Casino Royale‘s Madagascar sequence feels as tightly-constructed as action films get, a perfectly-paced series of inhalations and exhalations that maintains a clear sense of geography over a complex environment.

That environment gets an appropriately Bondian introduction by way of a mongoose/cobra fight that feels like it could have come straight from Ian Fleming. There isn’t much travelogue in the Bond films these days–the films’ pacing has become too aggressive to allow for it–so there is a tendency in the recent films to establish some colorful details up-front and rely on them to suggest the exoticism that the Bond films once wallowed in. Given that the rest of this sequence will reduce “Madagascar” (a combination of on-location shooting in the Bahamas and some backlot material) to some slums, a construction site (admittedly set against a strikingly-blue ocean), and a run-down embassy, this touch is appreciated.

Classic “movie Bond” might have strolled into this slum looking somewhat out of place (perhaps Roger Moore’s Bond might have even pulled out that safari suit he sported in Octopussy), but Casino Royale‘s Bond attempts to blend in with apparel that could have been borrowed from Jason Bourne’s wardrobe. As ever, though, Bond still sports an expensive watch, a visible hint of Bond’s taste for the finer things in life. (Costume designer Lindy Hemming gradually introduces the formal attire we associate with Bond throughout the film, building up to the ostentatious three-piece suit that punctuates the final scene.)

I noted the importance of body language to Craig’s performance, and just look at how great he looks during these introductory moments, leaning back against the wall like some immovable tree trunk, only to spring into action when things take a turn for the worse.

Casino Royale routinely juxtaposes Bond’s skill with his impatient hot-headedness. This supports the “Bond begins” arc of the film, but will also end up being maintained in subsequent installments (Craig’s Bond grows up a bit, but he will always be something of a blunt instrument and a rebel). This tense exchange with Carter is the first clear story beat to play with the idea (though, as my friend Jack Rodgers suggested to me, the first true example might be said to occur in the pre-title sequence, when Bond initially fails to drown his target and thus puts himself at risk of being shot). Carter’s exaggerated incompetence contrasts with Bond’s control, but Bond will break his cool soon enough.

Mollaka, who we’re told is a bomb-maker, is the first of a series of relatively-forgettable lower-level assassins and middle-men that we’re going to be introduced to in these early chapters of Casino Royale. In classic Bond fashion, Casino Royale‘s terrorists aren’t ideological. They’re opportunists, scrubbed of real-world specificity. In the Bond films, evil is generally a matter of sinister, shadowy economics. Bond even muses aloud about whether or not this bomb-maker has insurance.

Mollaka’s scarred face, a standard-issue villain disfigurement, does little to distinguish him in the pantheon of Bond henchmen, but the character has the benefit of being played by Sébastien Foucan. Foucan, a practitioner of parkour, brings his own dazzling brand of stuntwork to the sequence. A film couldn’t ask for a better special effect than Foucan’s effortless and fluid contortions as he leaps from obstacle to obstacle.

Craig is, by some measure, the most physical Bond (again, the influence of the Bourne films–Bond is now not just an adequate brawler, but a masterful close-quarters fighter), and he’ll weather some tumbles that should maim or kill him. To keep Bond from coming across as too invincible, the Madagascar sequence keeps him consistently in the position of underdog. Mollaka will make find a shockingly-elegant way around some obstacle and Bond will be forced to quickly improvise in a messy-but-efficient way. There is no better demonstration of Bond’s problem-solving approach than when Mollaka gracefully slips through a small vent, and then, to pursue him, Bond throws himself full-force through drywall.

Craig’s Bond lightens up a bit in the later installments as the films attempt to bring in more of the “classic” Bond sensibility, but here, he has no time for witticism. He’s too focused on his prey. (An earlier version of the chase gave Bond a brief callback to iconic Bond dialogue. When Mollaka tries to shoot him on the crane, Bond was going to utter a variation on Dr. No‘s “You’ve had your six,” but this was cut from the film. I suspect this is the reason for the slightly-strange edit during this beat.)

Bond’s single-mindedness reaches its peak when Bond causes an international incident by infiltrating the embassy of the fictional nation of “Nambutu” in order to obtain his target. There’s a note of old-fashioned imperialism in the way Bond’s intrusion lays waste to the embassy, even if this incident is used as the movie’s most dramatic illustration of Bond’s recklessness (note that M later chastises Bond for causing a major political incident, not for any collateral damage left in his wake). Additionally, the rebuke Bond earns for his actions here is somewhat weakened by the implicit validation the story gives him by rewarding him with valuable intelligence.

That intelligence, a consolation prize Bond receives after he abandons his initial goal of taking Mollaka alive, comes in the form of a text message with the word “ELLIPSIS” (a word presumably chosen by the screenwriters because it sounds vaguely mysterious). Thus begins Casino Royale‘s awkward relationship with technology, which, thanks to product placement, only exists in the form of conspicuously-branded Sony products. The subplot begun here becomes an example of the narrative over-complication that plagues all of the Craig Bond films.

One Reply to “The Facts of Death: Casino Royale, Part III”