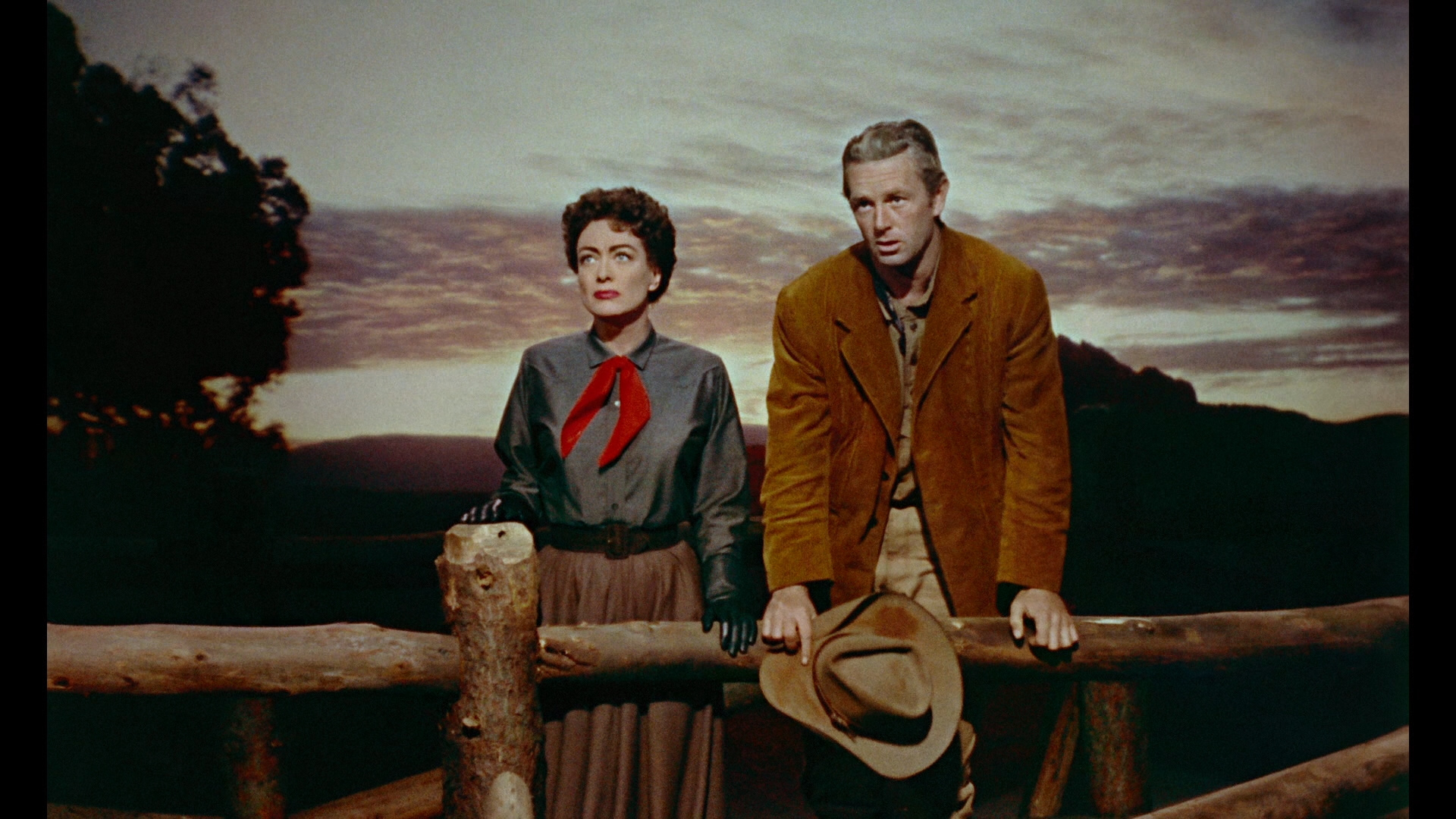 Joan Crawford, like Marlene Dietrich, was almost too powerful a force to be contained by the boundaries of the film frame. Few films serve her quite as well as Johnny Guitar, which allows Crawford to dart between contemptuous courage and existential fragility within the space of seconds.

After a brief prelude, Johnny Guitar initially unfolds as a tense and invigorating one-room stageplay, expertly and precisely staged by director Nicholas Ray as a ballet of wills and longings and violence (both latent and expressed). A suicidal energy cuts through each interaction. Every character here stands poised on the brink of combustion.

That’s an excellent space for Crawford, in particular, whose Vienna has clawed her way up from the streets and hitched her dreams to the westward expansion of the railroad. She made her way through the seedy underbelly of the old America and dreams of building a new one.

Sterling Hayden, a master of wry delivery, appears in the title role as Vienna’s former lover. His Johnny, a self-destructive gunslinger who has come to the end of his tether after a history of wanton bloodshed, represents both the culmination of Vienna’s dreams and the threat of its collapse into the wreckage of the past. They carry their wounds with them, and each might find their own demise in their acquiescence to the other.

This ballet, always in danger of transforming into a death-dance, plays out against the backdrop of a frontier turf war. This war between old and new Americas eventually breaks out from Vienna’s would-be enclave, the casino she’s built beside the future path of the railroad, into the unforgiving terrain of that frontier.

As with nearly all of the great Westerns things come together in a tense shootout. If victory remains elusive for any of the film’s characters, the next best thing is remaining alive. If Vienna cannot build the new America, she might survive the pangs of its birth. 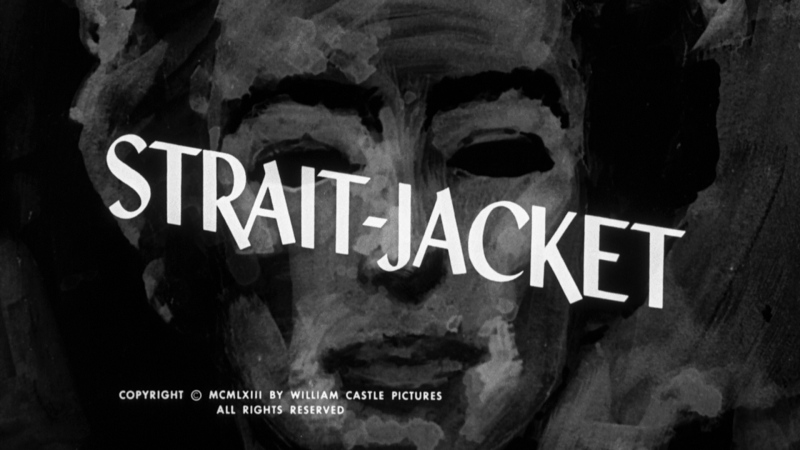 William Castle’s explosive 1964 film, Strait-Jacket, emerged in the wake of Alfred Hitchcock’s iconic proto-slasher, Psycho. Castle, an impish showman with a strong instinct for gimmickry, had been making horror pictures for years by the time Psycho was released, and the picture he made immediately after it–1961’s Homicidal–was accused by contemporaneous critics of being a crass ripoff. Castle’s effects were considerably more blunt and less “respectable” than Hitchcock’s, but if Castle wore the aura of carnival barker proudly, he could still be a very canny, expressive filmmaker. Homicidal may have sprung from the shadow of Psycho, but Strait-Jacket, made just a few years later, may be an even clearer descendant; Strait-Jacket was written by Robert Bloch, who wrote the novel from which Psycho had been adapted. Strait-Jacket repurposes some of Psycho‘s structures and motifs, but it proves to be more of a cousin to Psycho than a twin.

The psychological rupture at the heart of Psycho serves as background material to be doled out as exposition in the film’s denoument, but Strait-Jacket presents that rupture as its inciting incident, centering its dramatic arc on its protagonist’s attempts to re-enter society after years of recovery (in this way, its trajectory is actually more similar to that of Psycho II (1983), in which murderer Norman Bates struggles with his psychological stability as he returns to civilian life, than that of Psycho). Strait-Jacket does share Psycho‘s fixation on a maternal figure, but here the mother is both the film’s bogeyman and the film’s protagonist.

Joan Crawford stars as axe-murderess Lucy Harbin, who, in the film’s opening moments, brutally murders her younger husband and his lover after discovering them together. The film follows the psychological warping of Lucy Harbin–who first emerges as virile, confident, and sensual–as the realization of betrayal pivots from shock to dismay to psychosis, shifts that are all telegraphed with striking clarity by Crawford. As the violent act occurs, the film breaks apart before our eyes, blurring the line between the feverish experience of Lucy and that of her daughter Carol (who tragically witnesses the violent event). The decapitations are the first of many in the film, and in their cleanness as well as their unconvincing gore effects, they have a decidedly unreal quality that has been enhanced by the passage of time. The sequence climaxes with the image of Lucy, strapped to a gurney, screaming protestations of innocence, her twisting form superimposed over her daughter’s horrified eyes.

The shared trauma between mother and daughter turns out to be the heart of Strait-Jacket, and the title sequence, which serves as a pause as the film leaps forward twenty years, takes us into abstract, feverish images of that trauma: silhouettes traversing landscapes of severed heads and watchful eyes. The bookends–painted images of Crawford’s face as a vacant, eyeless mask–foreshadow the film’s climactic twist and suggests the way in which Lucy Harbin’s identity that has become untethered from the psyche. Van Alexander’s title cue disrupts lushly romantic, tender passages with eerie, wailing effects, the musical expression of a woman’s soul unable to reconcile itself to itself.

Crawford, now in the post-What Ever Happened to Baby Jane? phase of her career, anchors it through sheer conviction. Strait-Jacket demands that Crawford utilize the full range of her expressive abilities as she performs astonishing dramatic gymnastics, portraying a woman continually phasing through modes of meekness and anger and strength and weakness. Crawford proves adept at maintaining a sense of consistent character throughout all these sensationalized pivots, somehow able to reconcile the the vampy, confident woman she first emerges as and the washed-out, timid shell of herself that she has emerges as after twenty years in the asylum.

Lucy’s daughter, Carol, played by Diane Baker, remains preoccupied both with her mother and the past; the full extent of this fixation is not expressed until the film’s climax. Following her mother’s release, Carol seeks to return her mother to her past self in a sequence reminiscent of Judy’s transformation into Madeleine from Vertigo (and Baker herself has some of the Hitchcock aura; she memorably appeared in Marnie, which was released the same year as Strait-Jacket). Carol’s attempts to conjure the past also conjures up its demons, and hints of the latent violence in Lucy emerge, as well as hints of the raw sensuality of her youth. In one of the film’s wildest scenes, Lucy meets her daughter’s fiancé (who resembles the murdered husband, a hint at the daughter’s own fixations) and instinctively returns to her younger self, lasciviously flirting with him in a borderline predatory fashion. It’s a scene only Crawford could play, and she does it with panache; in a magnificent gesture, Crawford’s Lucy confidently lights a match by striking it on a record. This Lucy quickly crumbles when confronted with her greatest fear, the fear she might once again be imprisoned in an asylum. Another sequence in the film finds her trapped in a bathroom, frantically crying for release as she beats the room’s striped walls.

Much of the film features Lucy entrapped by the conceptions and demands of others, whether that be those of her daughter, of the doctor from the asylum (who stops by for a visit and, after seeing her distress, tries to return her to the asylum before losing his head), or of the parents of Carol’s fiancé. Without a strong sense of self, she is intensely vulnerable to the projections of others, both yielding to and resisting them simultaneously. But in the midst of these moments, glimpses of her vulnerability and tenderness emerge, her desperate hope that she might escape her own legacy of violence. None are quite so moving as when Lucy, fresh from the asylum, sees her daughter’s sculpture of her younger self and is left stunned by this monument to her lost beauty.

There’s a ghoulish sense of humor undergirding Straight-Jacket‘s trajectory of violence, a humor which will be familiar to anyone who’s spent some time with Castle’s filmography. Carol lives on a farm, and much is made of Lucy’s visible discomfort with the slaughter of the animals, as well as the cosmic pull of sharp knives and axes. The violence itself is staged with a keen sense of the lulls and pauses necessary to heighten the sense of anticipation, leading up the exclamatory burst of gore as the heads are removed from the bodies. That same perversity tilts over into the way in which the film relentlessly tortures Lucy, who the film continually pushes toward the breaking point, haunted by voices of children singing nursery rhymes about her murder and waking up to hallucinations of severed heads in her bed.

The hallucinations turn out to be nothing of the sort. Lucy has been a victim of a campaign to drive her back to insanity, a campaign led by her daughter, Carol. This reveal occurs as the film’s climax, as Lucy discovers that her daughter, Carol, is the murderer. Carol has become her doppelgänger, dressing up as Lucy in the same outfit Lucy wore during that tragic night twenty years ago, complete with an unsettling mask she sculpted on her mother’s features. Lucy pulls away, unable to utter a word. Carol’s own calm facade crumbles as her fiancé finds her, pleading with him as she explains she sought to kill his disapproving parents so that they could be married. Carol’s frantic explanations give way to incoherence; she pummels the mask of her mother with her fist, alternating proclaiming her hatred and love of her mother. Like practically everything in Strait-Jacket, the moment has no real subtlety, but it’s still agonizingly raw. Baker’s collected manner gives way to the frantic mania that Crawford’s gave to in the film’s opening minutes, as Crawford’s Lucy stumbles outside, bewildered.

That gut-wrenching revelation and its aftermath functions as the film’s true ending, the jarring conclusion of a nightmare. The scene that follows feels like the morning after, with a serene Lucy talking to her brother, neatly explaining all of Carol’s insidious attempts to exacerbate her mother’s mental instability and frame her for murder. If the film would be better without this attempt to assuage the audience, the film nevertheless concludes on a poignantly sad note: Lucy will be joining Carol in the asylum in the hopes of helping her heal, a mother bound together with her daughter in trauma and violence and madness.