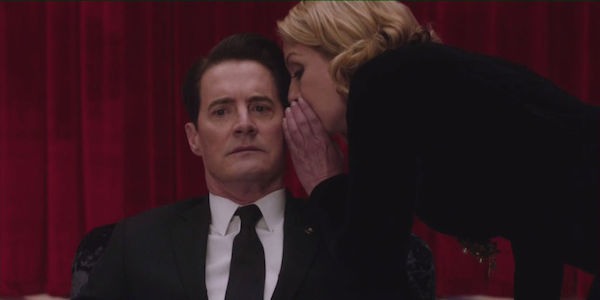 So, the final chapter of Twin Peaks has aired, a defiant rejection of closure that confirms that Twin Peaks has always been, in essence, a horror story. Twin Peaks is a journey into the void left by one girl’s inexplicable murder, a mystery that, like Laura Palmer’s eternal scream, echoes across time and space and imagination.

For all of its disconcerting dread-laced strangeness and temporal shifts, the finale does mostly explain its chain of narrative events through bursts of exposition from Gordon Cole and the cryptic pronouncements from Phillip Jeffries and the Fireman (though these statements are more comprehensible in retrospect that they are upon an initial viewing).

Dale Cooper, acting on a secret plan he worked out with Gordon Cole and Garland Briggs, as well as on the guidance of the mysterious Fireman, wishes to “kill two birds with one stone”–save Laura Palmer and confront and defeat Jowday, a.k.a. “Judy,” an extreme “negative force” that gave birth to BOB and seems to have possessed the Palmer house and its lone inhabitant, Sarah Palmer.

Gordon Cole cautions that he’s uncertain if this plan is working, though Cooper certainly seems confident enough when he returns to Twin Peaks and bears witness to BOB’s destruction. The fabric of time begins to tear as Cooper travels back to the moments before Laura Palmer’s murder and rescues her. Before he can restore Laura to her home (presumably hoping to dispel the darkness from it once and for all), Laura is whisked away from him, her scream echoing throughout the woods.

Cooper seems saddened by this, but was apparently expecting this, or a version of it, given that the direction he received from the Fireman and Jeffries leads him from this moment to a place beyond the boundaries of the dimensions we have known so far in the world of Twin Peaks. Cooper and Diane travel into an alternate timeline, a universe that is apparently the domain of Jowday/Judy. In traveling between these worlds, Cooper seems aware that he might lose something of himself. He notes to Diane that they will be different when they arrive at their destination.

Dislocation and disintegration follows. At a motel waystation between worlds, darkness overtakes Cooper and Diane; their romance dissolves before our eyes. Cooper wakes the next morning to find that she’s no longer with him, reading a note addressed to “Richard” from “Linda” (presumably Cooper and Diane’s identities in this alternate universe), in which Linda tells Richard that he is no longer recognizable (echoing Audrey’s remarks to Charlie earlier in the season; Audrey, too, has apparently lost herself in a false universe). Using Jeffries’ guidance, Cooper (who now seems colder, more ruthless, not unlike his own BOB-inhabited doppelgänger that was destroyed in chapter 17), locates Laura’s doppelgänger, a waitress in Odessa with a rotting corpse in her home, and tries and fails to remind her of her life. Together, they head to the Palmer home in Twin Peaks.

The drive from Odessa to Twin Peaks proceeds slowly. Cooper and Carrie/Laura arrive at the Palmer home. The Palmer homestead no longer seems to actually be the Palmer homestead; Cooper responds with puzzlement as he hears from its current inhabitants that the house previously belonged to an Alice Tremond, and before her, a Mrs. Chalfont (a note that suggests the house is still in thrall to evil, given that Mrs. Tremond/Chalfont has appeared previously in Twin Peaks as a mysterious figure with with links to the Black Lodge).

A defeated, confused Cooper proceeds back into the street with Carrie/Laura. Cooper’s chilling final utterance–“What year is this?”–gives voice to Cooper’s awareness that he has lost the thread. Carrie/Laura suddenly seems to recall her traumatic memories. Her face contorts in horror as she utters, once again, that universe-shattering scream. The Palmer house seems to come to life: all its lights blink out, just seconds before an electric crackle sends the entire world into darkness.

It’s hard to imagine a bleaker conclusion for Twin Peaks. In bringing Laura to the Palmer homestead, Cooper has not conquered Laura’s trauma, but forced her to relive it. Cooper has lost himself, and Laura with him, presumably forever. Cooper and Laura are orphaned from all worlds, no longer belonging anywhere in space or time, trapped in the grasp of unspeakable evil. Laura’s scream echoes in the void, displaced in darkness.

The final shot of Twin Peaks–Laura Palmer, whispering an inaudible secret to a visibly distressed Dale Cooper in the “Red Room”–speaks to the way in which they share in–and have been enveloped by–the unspeakable mystery of evil.